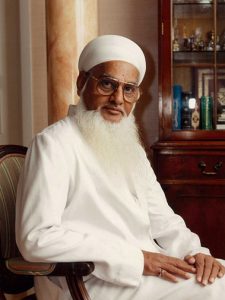 Our mentor Shaikh Jaffer A. Ebrahim is the very personification of the groups core values. Having spent 62 years of his life working in the group, Shaikh Jaffer is AEG’s longest serving leader. Extremely warm and affectionate as a person, Shaikh Jaffer possessed an extraordinary ability to lead changes and was widely knowledgeable in different industries. The calmness he portrayed was the hallmark of a great leader with extreme focus on the path ahead.

Born on 9th June 1927 to Mulla Abdeally Noordin, grandson of our founder, Shaikh Jaffer was posted to the Hong Kong branch office in September 1946. He was always passionate about accounts, and in his first years, spent many occasions helping the company in its financial affairs. Growing influence steadily within the firm through his great competence, Shaikh Jaffer managed to steer the company to many new and profitable directions and eventually consolidated the ownership of the firm first under his immediate family in 1966, then under himself in 1988.

Shaikh Jaffer’s greatest business attribute was his vision. He was responsible for starting the housewares division in 1961, and initiating the shipping business in 1978. He opened a Myanmar branch office in 1989 to expand the firm’s commodities business. In 1995, he opened the Pakistan branch office, and in 2002, spearheaded the iron ore trade between India and China.

In management teachings Shaikh Jaffer was an example to us all. “Look at the positive attributes of a team member and make the most of those,” he once said. Even teaching his own family, he applied the same principles. “As an A-level student I was anxious to study something appropriate at university for the company’s benefit. Instead he encouraged me to study what I was passionate about. He always believed in passion and to progress in those activities that motivated you,” remembers his son and current CEO Taha Jaffer Ebrahim.

For Shaikh Jaffer, quality was his first and foremost guiding principle – hence his motto “Think Quality, Think Abdoolally” – and diversification the second. “The ocean is big and there are many fish to catch. Learn how to use your fishing rod, find where the new fish are and then feed them with good bait so they are satisfied,” explained Shaikh Jaffer to his son when he first joined the company.

Shaikh Jaffer always had good words to speak about everyone and never believed in complaining. As a “gentleman to the core”, he always kept his doors open for everyone no matter who they were. When former Cofco Jilin employee Dai Jun was close to losing his job after making a serious mistake, causing his client – AEG – to lose considerably, instead of blaming him Shaikh Jaffer offered him a job.

Throughout his life he believed in helping people not only financially, but with his time and knowledge, so that they might sustain themselves independently. He was a silent helper never letting the left hand know what the right one had done. He was equally passionate in his faith. He was an exemplary Dawoodi Bohra Muslim, following the teachings closely. He had great belief in the spiritual leader late Syedna Mohammed Burhanuddin Saheb (RA) and donated to many noble causes for his community and beyond. Today the group continues to be blessed under the guidance of His Holiness Syedna Mufaddal Saifuddin Saheb (TUS).

Shaikh Jaffer passed away on 8th February 2008 at 80 years of age. He may have left us in body but his passion for business, for social and religious causes, his relentless creative energy, his fighting spirit and his nobility will remain unforgettable to all of us

Product has been added to cart